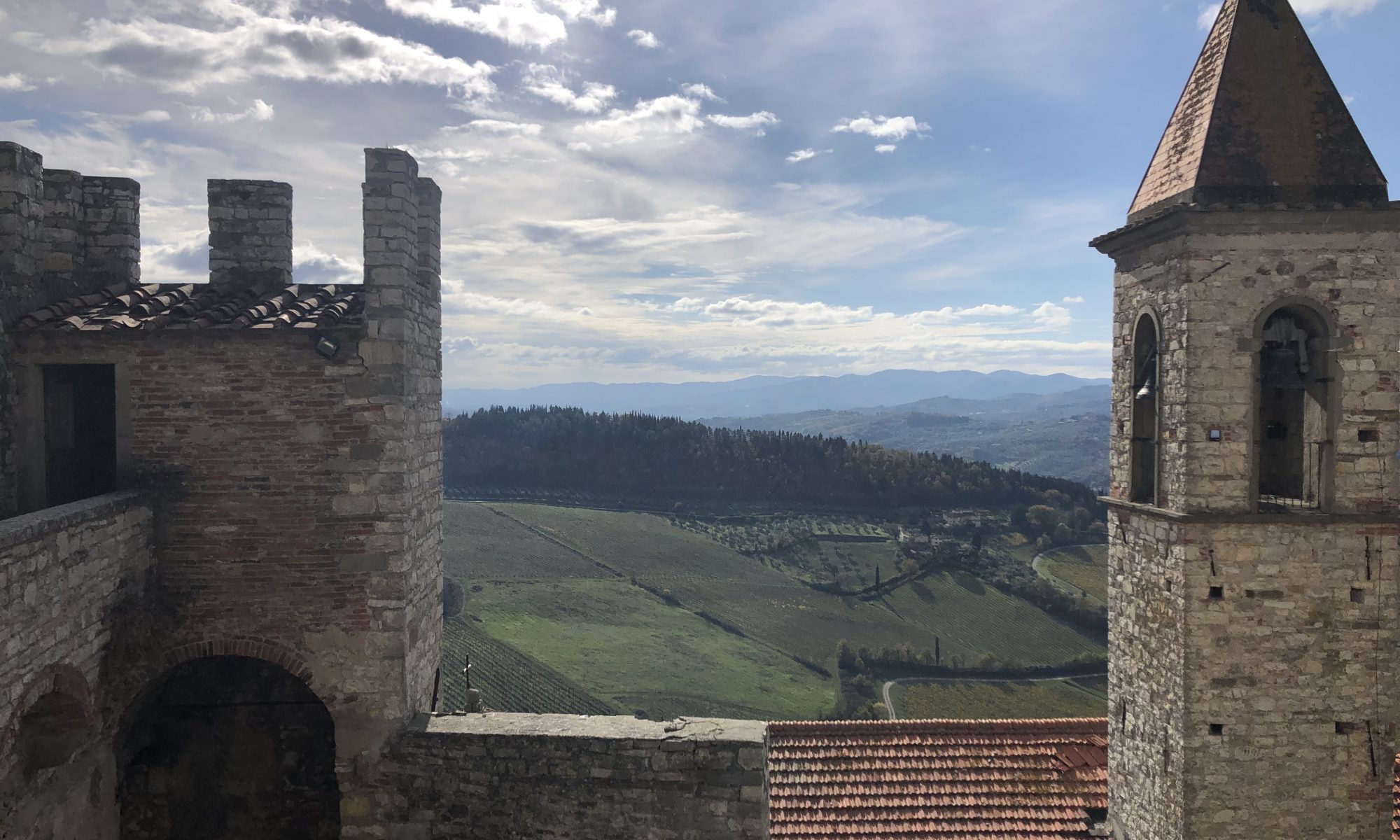 Getting off the bus at Frescobaldi’s Castello Nipozzano, the first thing you notice is the stunning view. Imagine: a storybook castle sitting atop a hill overlooking gorgeous rolling hills of Tuscany with a small path amidst the trees, leading down to a picturesque town nestled in the valley. Silver olive trees dotting the hills, spread out as far as the eye can see in a beautifully unplanned fashion, intermixed with cleared land for wine production, bordered by tall, stately Italian cypresses. The sun beaming down in the crisp autumn weather with only the odd fluffy white cloud in the picture perfect blue sky. You can hear the crunch of the gravel as you walk towards the entrance and smell the smoke of a controlled fire in the field used to replenish the nutrients of the soil. The setting is picturesque and its elegance is reflected by the high quality products the Frescobaldi group put out. One product in their extensive portfolio is Laudemio, a premium extra virgin olive oil.

As Mr. Matteo Frescobaldi, class of 2012, ESCP alumnus and manager of Laudemio shared with us, harvesting the olives is the most important step in making Laudemio. Speed is particularly critical for quality because the window to harvest the perfectly underripe olives is incredibly short, sometimes as narrow as two or three days. If the olives are allowed to ripen too much their quality drops precipitously. While having olive trees haphazardly spread across the hills is aesthetically pleasing, it is terribly difficult from a business and production standpoint. The hilly terrain and the patchwork layout makes it difficult for machines to efficiently harvest each tree quickly. Shaking each tree until the olives fall onto waiting nets must be done slowly when the trees are at odd angles and irregularly spaced; requiring each tree to be approached at a unique angle. The beauty can inspire but nature doesn’t grow on spreadsheets.

The beauty certainly captivated me and my classmates. We couldn’t get enough pictures of the land, trees, and each other. We took turns snapping photos in ever changing groups as if our lives depended on it. For us the messy configuration of the trees was perfect but we understood why Laudemio would want to change it.

Replanting the groves can solve the inefficiency issue but it takes time. The olive trees don’t mature and become ready for full production until about 5 years later. The upfront investments and long payback period might put off other business but what is 5 years to a family and brand that measure time to the nearest century?

For us mere students the 8 hours we spent at Frescobaldi was magical. The chance to take a break from rigorously studying theory and instead interact hands-on with what we’d been learning was the perfect change of pace. To add to the excitement, we were served a lunch of home-made pasta with a pumpkin puree and a cream sauce. It was followed by braised boar with a quenelle of mashed potatoes and cooked greens. All of this served with a glass of a local chardonnay and a glass of Nipozzano Riserva 2008. The professors at ESCP’s International Food and Beverage Management programme are great, but its hard for a lecture about the wine business to compete with an in-field practical wine study session! For us our time there had to end at some point, but not for Frescobaldi and the land they’ve cultivated from time immemorial.

The Frescobaldi group has been operating since the 1300s and Matteo Frescobaldi represents the 30th generation. They have been producing quality wines for roughly three times longer than the USA has been around. Although we spent more time with Matteo Frescobaldi and his olive oil division, the Frescobaldi group is known primarily for their wines. They make a variety of classic Tuscan wines such as their premium Ornellaia and Tenuta Luce while also producing more affordable wines like the one we consumed at lunch: the Nipozzano Riserva. Moreover, they helped bring French varietals to Tuscany in 1855 which later helped spark the Super Tuscan revolution in the 1970s. When it comes to time, the Frescobaldi family has some to spare.

The newest product in their portfolio is a wine called Cuvée Voyage, a sparkling wine targeting the younger generations. It is Frescobaldi’s effort to bridge the gap between their traditionally older, more affluent segment and the new growing segment of Gen-Zers and Millennials. To adjust, they changed their distribution channels focusing on bars and nightclubs rather than their normal restaurants and wine stores. The black bottle with a pumpkin orange neck is a stark departure from the more traditional white labeled Nipozzano Riserva and Perano Riserva Estate. The promotional video is also a deviation; showing a sizzling reel of young people –mainly women—having fun with a glass of wine in hand interspersed with glamour shots of the luminescent orange label. The whole project is a 360 from the more stately approach to communication Frescobaldi has historically embraced.  The changes seem to be working. They quickly sold out their first production of 25,000 bottles and have high expectations for next year’s production. Despite this, our class was split on if the success would continue in the long run.

Despite the positive indicators, it’s hard to parse out how much of the success is due to the product itself and how much is due to its natural leg up in the market. The wine came with Frescobaldi’s powerful brand prominently displayed on the neck and instantly tapped into Frescobaldi’s distribution network. Both of these and numerous other smaller benefits undoubtedly contributed to the success, but was the market responding to these or to the intangible qualities of wine? What about Annalisa Pol’s, the marketing and customer experience director for the Frescobaldi group, marketing plan and marketing strategy? How much will the quality wine and the marketing plan secure long term success in the market? We never came to a consensus. Perhaps we will after a few bottles!

As night fell, we took a few last pictures as the sunset burned orange atop the hills in the distance with the lights of the town outlining the valley. Eventually we let ourselves be herded onto the bus and pulled away into the night back towards Florence. Tomorrow was a new day and a new winery awaited us.

Thank you to ESCP and the International Food and Beverage Management programme for making this happen. Thank you to Matteo Frescobaldi and the Frescobaldi group for inviting us to see how you do what you do and for your hospitality.